Glanmire were easily disposed of in the county quarter final on a score of 3-07 to 1-00. Clara of Millstreet provided the opposition in the semi-final and four goals from the team captain Mick O Brien helped in no small way to a three-point victory 4-03 to 2-06. The county final played in Fermoy was against the famed St Finbarr’s. In what was described as a real thriller with scores at a premium had the Blackthorn’s leading at half time 2-02 to 0-03. A determined second half performance by St Finbarr’s saw the lead reduced to one point. Blackthorn’s steadied the ship and claimed the one and only minor a county championship on a score of 2-03 to 1-04. The team that won the county was, Seamus White; Paddy Carey, John McGrath, John Cotter; Paddy Clifford, Ned Monagahan , John Joe Harrington; Ned Coughlan, Jimmy Clancy; Tim Mulcahy Mick O Brien Kevin O Connor; Colman O Brien, Johnny Sweeney, Tom Monaghan. Michael Noonan was introduced as a sub during the game. The game was refereed by Fermoy man Derry Gowen. Mitchelstown’s novice team also created their own bit of history with the assistance of six of the successful minor team won the club its first North Cork Novice championship when they defeated Kilshannig 2-07 to 3-01 in the final 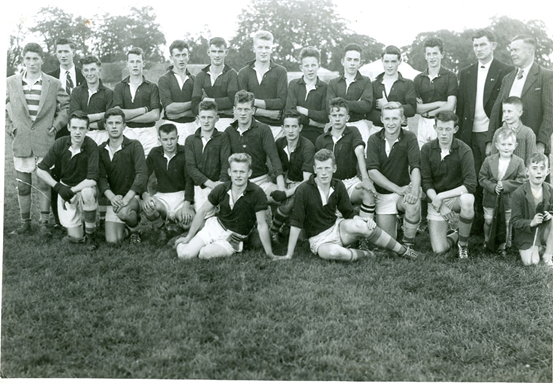 The Gaa in conjunction with the Broadcasting Authority of Ireland have launched the Gaa Digital Archive which will provide free access to past Gaa matches to internet users the world.113 All Ireland           Finals since and provincial finals from 1961 are included in the archive. This new archive also features All Ireland club finals club finals since 1989.In all over 500 matches with information such as results, venue, referee, scorers, teams and substitutions were added. It can be accessed on https://www.gaa.ie/gaa-now/archive/

An air of sadness swept through the club on Wednesday evening (April 15th) last when news filtered through that one of Mitchelstown’s greatest supporters Willie Slattery of James Street had passed away. A life long supporter he will be sadly missed by all who had the pleasure of knowing him. A man well versed in Gaa, there is many who will miss the conversations that could start anywhere or any time   To his wife Hannah and family we extend our sincere sympathy.

On Tuesday April 14th Lieutenant General James Parker formerly of Mitchelstown went to his eternal rest. Jim played football with Mitchelstown in his early days winning a North Cork with Mitchelstown in 1948 wearing the no 6 jersey for a man who was only 5 foot 6. Mitchelstown were beaten in the county championship by Collins a club in which Jim won a senior county medal in 1953. To his family we extend our sympathy.

The club also extends its sympathy to Brian Burke  and family on the passing of Brian’s father in Fethard Co Tipperary. May he rest in peace.